This is page 5 of our nine page series on hydroponic vertical farming.  Click any of the below pages to jump to that page. 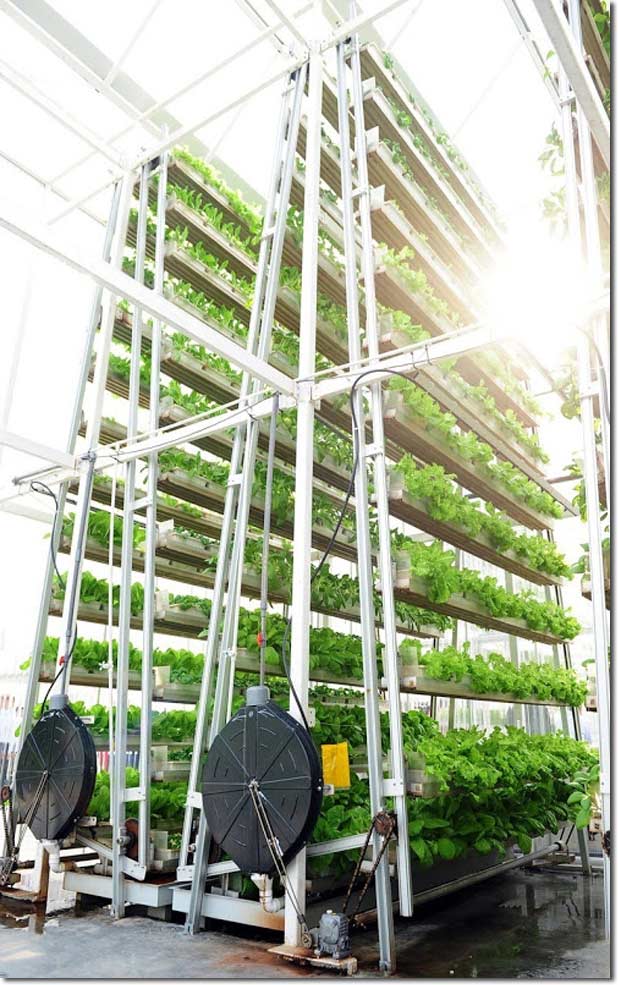 Vertical racks which move up or down on their metal frames.  This setup provides a variety of benefits: extremely dense plantings per square foot of floor space, easy human access to the plants, and good plant access to light.  However, it creates a few other challenges.  The crops in this system must be relatively short at mature heights, and they must be planted into lightweight growing media so the total weight does not overwhelm the mechanism.  Also notice that the rack must be anchored top and bottom to ensure that it does not tilt or rock back and forth as the motors turn the mechanism.  This setup would avoid the need for scissor lifts, but it would need to be well maintained in order to remain in good working order.  Photo courtesy of an NPR article on the Sky Greens vertical farming system in Singapore.

As we’ve seen with other growing systems, the growing media most appropriate for vertical farming depends upon which irrigation system is used.  Many vertical farming systems use NFT trays, in which case the growing media would be rockwool cubes suspended in net pots over an irrigation channel.  I’ve seen reference to a few vertical farming systems which used small bato buckets or extremely shallow, narrow flood-and-drain trays.  In that instance, the growing media would ideally be something lightweight like rockwool or coir.  While most of the weight will consist of the nutrient solution during the flood stage, heavy growing media such as gravel would easily double or triple the system weight.  That would add unnecessarily to the cost.  Some vertical farming systems advocate using aeroponics, which we haven’t covered.  Without going into that approach in detail, suffice to say that aeroponics relies on suspending the plants on a closed chamber where the roots dangle in mid-air.  The irrigation solution is then sprayed on the roots at regular intervals.  Given this arrangement, the growing media of choice would be rockwool cubes in net pots, which would allow the roots to grow through the net pots and extend out into the air chamber for irrigation.  Weight issues with this arrangement would be relatively small compared to the other options listed above.

Which Crops Work in the Vertical Farming System?

This question is determined by several variables.  First and foremost, which irrigation system is used?  Second, how closely are the trays or beds stacked one atop the other?  Third, how much effort is required to reach the crops for planting, pruning, and harvesting?  Let’s look at how these three variables come together.

As we saw in the previous section, one of the most practical options for vertical farming is the nutrient film technique, or NFT.  Multiple trays can be stacked relatively high without great weight or bulk issues.  However, NFT does set some limits on which crops can be grown.  NFT is best suited for crops which have small to medium mature size and root mass, such as leaf lettuces, other salad greens and some of the smaller non-woody herbs such as thyme and oregano.  Why this limit?  Because the larger the plant, the larger the spacing will need to be between trays.  Taller plants such as chard, perennials such as mints and rosemary would take up too much space, either between trays, alongside, and/or within the NFT channel.  Root crops also would be a problem in NFT channels, because the roots would form up along the NFT channel floors.  That would distort both their size and shape.  Some of the smaller root crops, such as garlic, onion and perhaps carrot, would still be edible in such a system, albeit deformed.  They might also partially block flow of nutrient to the downstream plants.  Larger root crops such as parsnip, rutabaga and mangels would simply grow too big for the NFT channels.  They would either grow out the tops and/or completely block flow of nutrient to downstream plants, resulting in nutrient spilling out of the channel, dead plants or both.  If root crops are a central part of the vertical farming plan, a different growing system would need to be used.

All that being said, there is no rule which says that NFT must be used.  Other growing methods are possible, even though they would present their own challenges in a stacked arrangement.  A grower would have to carefully evaluate the benefits of the crops which can be grown in those systems, versus the costs of stacking that extra weight and/or width.  Rather than go through all the myriad possibilities, we suggest a review of the other growing systems described elsewhere on this website, and consider how those methods could be stacked for vertical farming purposes.  If you come up with a cost-effective solution, Contact Us and we'll be happy to give you credit for your creative approach to the above issues.

This is page 5 of our nine page series on hydroponic vertical farming.  Click any of the below pages to jump to that page.