This is page 1 of our nine page series on hydroponic vertical farming.  Click any of the below pages to jump to that page. 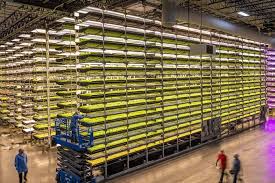 Many people consider vertical farming as the pinnacle, literally and figuratively, of hydroponic food production.  The approach has a lot of promise, and a lot of challenges.  We'll take a look at various aspects of vertical farming in this nine page series.  Photo courtesy of www.tastingtable.com and their article on urban farming.

Hydroponic vertical farming, or just vertical farming for short, is a catch-all term to describe a variety of similar hydroponic methods.  While these methods differ in terms of growing media, irrigation method, size, scalability and other details, they all share one characteristic: they stack multiple growing beds or trays one on top of the other in a vertical arrangement.  Some vertical farming arrangements only have a few levels in the stack, while larger vertical farming installations have a dozen or more racks one atop the other.  Contrast this to a more typical standard arrangement of these same trays or growing beds spread out at one horizontal level, usually at ground level.  While this difference may seem trivial, it turns out that vertical farming has a lot going for it.  It also has a lot of strong disadvantages.  We’ll take a much closer look at both.

Before we get into those issues, I did want to make another distinction.  So far in our review of different hydroponic methods, we have looked at a variety of proven approaches.  Each of those approaches has a long, successful track record of producing a variety of crops.  We’ve looked at each of those methods in terms of which crops can be grown in which method, in the most cost effective ways.  Each of those method has thousands (if not tens of thousands) of growers using that method at scales ranging from a few plants on the patio or deck, to large commercial greenhouses.  While profitability is sometimes a priority and sometimes not, at least each of those methods has working examples of profitable operation.  Vertical farming, however, is still primarily a method under development.  It is a long, LONG way from being a proven, cost effective approach.  While a few enthusiastic individuals have launched commercial ventures, and many hobbyists are testing different vertical farming approaches, as of this writing (late 2018) there are precious few commercial operations using vertical farming.  Furthermore, a number of the larger commercial ventures which have launched in the last 10 years, closed after running only a few years.  Those operations experienced some of the anticipated advantages, but they experienced some unexpected disadvantages as well.  We’ll talk more about their experiences a little later in this series.  Most surprisingly, many of the most vocal fans of vertical farming aren’t using the method at all.  Instead they continue to discuss what vertical farming can do and should do and must do, without having proven (yet) that vertical farming can do all those things.  Amongst other claims, vertical farming has been called the future of agriculture, the last best way to provide food for the world, and even the cure for a wide variety of social ills.  We’ll talk about all those claims in the various sections of this series.

Far be it for me to rain on anyone’s parade regarding a hydroponic method.  I say all the above only to provide a cautionary note about a lot of the information floating around the internet which make dubious claims which have yet to be proven.  Of all the methods being used in the world of hydroponics, vertical farming is somehow both blessed and cursed with a lot of extremely high expectations.  As with other hydroponic approaches, we’ll cut through the hype and take a hard look at what this approach can, and cannot do.

Before we get started, I do want to put in some caveats.  In this series, we’re going to restrict our conversation to that version of vertical farming which features multiple rows or trays of growing plants, in stacks which are anywhere from person-height to several stories tall.  This is in contrast to the much more common practice of trellising single plants, sometimes to similar heights.  The most commonly trellised plant in the hydroponics world would of course be the tomato (and we’ll talk about the tomato a little later on in this series), but other vining plants such as summer and winter squashes are also sometimes trellised.  We’ll consider the tomato as something of a hybrid, with some features in common with both versions of vertical farming, and some features which would seem to exclude it.

Another caveat is the consideration of automated systems.  Hydroponics is already very much served by a variety of automated systems – irrigation systems, lighting systems, temperature systems, ventilation systems and other environmental controls are commonly automated.  However, an entirely different class of automation is the mechanical manipulation of individual plants, for instance seeding, pruning, sampling and harvesting.  Some who advocate that vertical farming is the wave of the future, talk about automated systems which do all these tasks as if those systems are already commonplace.  While those systems do exist, they are a) still quite uncommon, b) are often proprietary to individual large-scale commercial setups, and thus not available to the average grower, c) very expensive, and d) require human managers.  As of this writing (late 2018), those automated crop manipulation machines are still very much out of reach for average growers, thanks to their cost and complexity.  While hobbyist robotics enthusiasts are building new mechanized helpers every day, we are still at least 5-10 years from having automated helpers doing common crop manipulation work, at a low enough cost to be practical for small-scale commercial or hobbyist growers.  Given all that, we’re going to assume (for the time being) that any individual plant manipulation, be it seeding, pruning, transplanting and harvesting, will be done by human hands.  In that context, then, our following comments about what does and does not work well with vertical farming will also be under the assumption that human beings are doing that work.  If/when that situation changes, we’ll update this section accordingly.

This is page 1 of our nine page series on hydroponic vertical farming.  Click any of the below pages to jump to that page.