This is page 2 of our nine page series on hydroponic vertical farming.  Click any of the below pages to jump to that page. 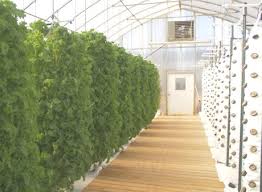 Vertical Farming doesn't have to be multiple-story installations.  Plantings can also be both successful and productive on a much smaller scale.  Some of the most successful vertical farming installations are those which stack plants vertically yet within a single story, so that people can stand on the floor and reach all the plants.  Photo courtesy of www.hortidaily.com and their article on sustainable growing practices using vertical growing methods.

Hydroponic vertical farming methods have one unifying feature: trays or growing beds which have been stacked one above the other, such that any given growing space is used as efficiently as possible.  For instance, where the standard Nutrient Film Technique would have a single set of NFT channels laid out at waist-high level, those same trays could conceivably be stacked one above the other vertically.  The main advantage, then, is that the same growing capacity takes up much less square footage.  Alternately, any given growing space can be most effectively used with vertical growing techniques which fill not only the floor space, but also the room's full volume.

This issue becomes a critical advantage when square footage and/or interior growing area is extremely valuable or scarce.  A grower who lives in suburbia with a generous backyard would have room to spread out the NFT channels at waist-high level, and still have room to spare.  That same grower living in an apartment in a crowded urban area may want to grow the same crops, but have much less space to work with.  That’s where vertical farming comes in.  That urban grower could stack those trays against one or more walls and grow the same volume of crops.

Scale up for commercial growers, and the same advantage applies.  A commercial grower in a suburban or rural area will, generally speaking, have much lower per-square-foot costs compared to an urban grower.  For instance, if a commercial grower wanted a 5,000sqft growing space for plants, he or she would pay exorbitant costs for that space in an urban area, less in suburban, and much less in rural areas.  Traditionally, growers have selected rural or suburban growing areas for exactly this reason.  They needed the space and didn’t want to pay middle-of-city costs for it.  That approach worked in small towns and rural areas near large urban areas.  Those growers could build large greenhouse facilities where land was relatively inexpensive, and still afford to deliver their produce to their urban clients.  However, as some of our cities have grown and expanded, and transportation costs have increased, those delivery costs have gone up dramatically.  Customers have also begun to demand local produce rather than produce which was shipped in from hundreds, or even thousands of miles away.  As a result, growers are looking at ways to grow right in the heart of big cities.  Which is where vertical farming comes in.

Another instance where vertical farming really shines is in extreme environments.  One instance would be heated growing space within an extremely cold climate , for instance in polar regions.  Another would be modified growing environments within extremely hot and dry environments.  This even extends to the eventual production of crops on some other planet, for instance for a colony on the Moon or on Mars.   Under those conditions, every last cubic inch of space must be used as efficiently as possible.

Vertical farming makes use of two advantages: first, the dramatically higher productivity per unit growing area, as compared to conventional soil production.  Second, the growing trays are stacked one atop the other to save on floor space.  Those two features cut expensive floor space to a minimum, while capturing all the benefits of increased hydroponic productivity.  This is the holy grail which fervent vertical farming advocates claim will save the world – maximum productivity in a minimum of space.  Of course all the other advantages native to hydroponic production apply as well - more efficient water usage, more efficient nutrient delivery, etc.  Stack all these advantages up and vertical farming can make food production possible in environments previously unable to support agriculture.  In that sense, yes, it can feed the world.  But before we get too excited, we need to consider some serious disadvantages.  We'll look at those next.