You are on Page 1 of our ten page series on hydroponic bucket systems.  Click on any of the below pages to jump to that page. 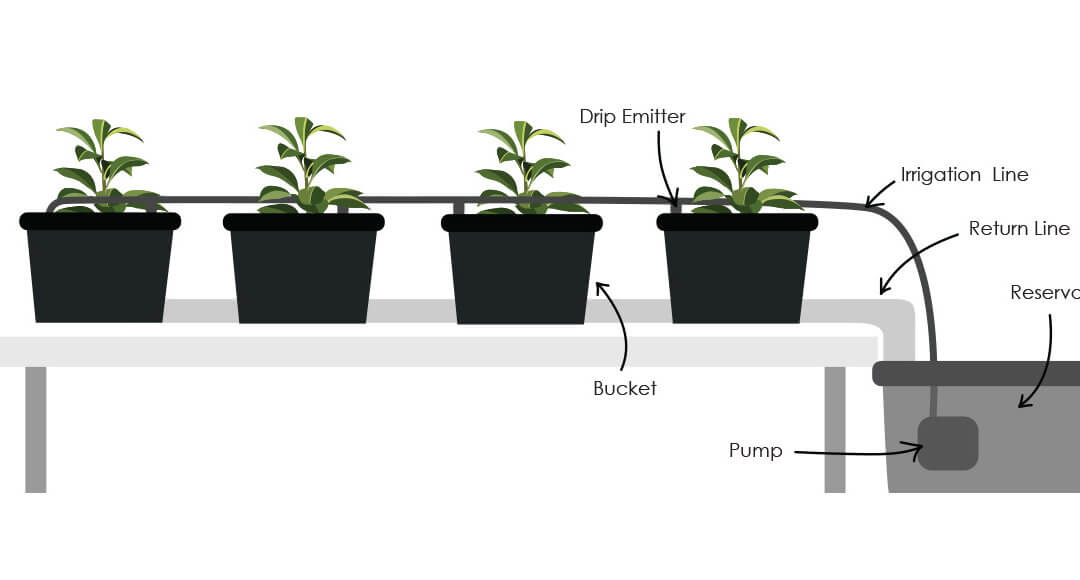 Hydroponic bucket systems, also known as “bato buckets”, “Dutch buckets” or “black buckets” are an interesting hybrid of several other hydroponic systems.  As such, the approach has some inviting advantages with relatively few disadvantages.  While it may not sound very high-tech compared to some of the other systems we discuss on this website, don’t let that fool you.  It is an extremely popular growing system and for good reason.  So let’s take a closer look.

Regardless of the specific name you call it, a hydroponic bucket system is composed of, you guessed it, small containers (or buckets) which generally hold one to two plants.  Two is the standard.  The “bucket” in question isn’t actually a bucket in the sense of being a round pail with a carry handle.  Rather, that’s the nickname given to the container, because most hydroponic buckets are sized about like an average water bucket would be – roughly 3 to 5 gallons.   Most hydroponic bucket systems have multiple buckets – ranging from half a dozen for a small hobbyist system, all the way up to hundreds or even thousands of buckets for a commercial system.  These buckets are all connected by at least one, and sometimes two, different networks of plumbing: always an irrigation line, and sometimes a drain line.  We’ll discuss the drain line options in more detail a little later on.  In the meantime, the only other major component of the system is either a nutrient reservoir for smaller systems, or a nutrient injection system for larger setups.  We’ll talk more in a moment about the differences between those two irrigation methods.

As in the illustration above, the setup is relatively simple.  The buckets are arranged along a convenient path, typically in a row or aisle, and the irrigation line runs alongside.  The irrigation line itself is often a rigid or semi-rigid line of PVC or other standard plumbing line, sized large enough to deliver nutrient solution to the entire length of buckets.  That irrigation line diameter may range in size from ¼ drip irrigation size to a whopping 1” main line for large systems.  Then from that irrigation line, a single irrigation tube goes from the line to the bucket, to provide fresh nutrient solution to each bucket.  If a drain line is included in the system, it typically goes either back to the reservoir, or empties outside of the growing area so as not to create a muddy or slippery mess right where the plants are growing.  Systems which have a drain line running away from the reservoir, and/or systems without drain lines at all, are collectively described as being “run to waste” or “running to waste”, ie, the spent nutrient solution is not returned to the reservoir or recirculated within the system.

Let’s talk now about how this approach is a hybrid of other hydroponic systems.  That hybridization comes from the different methods you can use within the given setup options described above.  Some growers favor a flood and drain approach, so their buckets are filled with growing media, and the irrigation cycle is pulsed to provide a repeating flood stage and drain stage.  A second very common approach is to run a continuous drip into growing media, to provide a constant level of moisture and nutrients.  Other growers favor a deep water cultivation approach for their plants.  In that setup, the buckets would contain net pots suspended by a small raft (or simply held up via the bucket lid) within or above a small pool of water.  In that instance, the irrigation cycle would not pulse so much as simply top off the water levels in each bucket on a regular basis.  That system would also need to periodically drain off the spent nutrient solution and replace with fresh.  That could be a pulsed event (for instance, once/day or once/week), but it would not occur as frequently as the sometimes very rapid flood/drain cycle for flood and drain systems.

Two less common but still possible setups would be NFT and aquaponics.  In the former setup, the bucket lid would hold the net pot in place, the irrigation line would drip near-constant fresh nutrient solution onto and over the plant roots, and then the waste would drain out of the bottom of the bucket.  The remaining volume of the bucket would ensure that the roots were protected within a high-humidity, no light atmosphere.  If you really wanted to get exotic, you could install a third air line which feeds into this space to constantly refresh the air supply for the roots.  This is similar to the constant drip approach mentioned earlier, except this approach doesn’t use growing media.  The roots extend from the net pot into thin air within the bucket.  In this regard it’s almost a form of aeroponics.

In the aquaponics type setup, each bucket would essentially become a small aquarium.  The bucket lid would again suspend the plant(s) in net pots, and the rest of the bucket would hold a small reservoir with a population of fish.  In that setup, a small pump or aeration line would be required to circulate the fish waste throughout the bucket so that roots would have access to those nutrients.

These latter two systems are much less common because various logistics start to add up and make them less and less practical.  Nevertheless, they are technically possible.

Click any of the following links to jump to that page: