This is page 6 of our twelve page series on nutrient film technique.  Click any of the below pages to jump to that page. 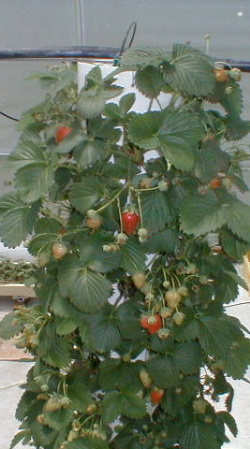 A variation on the NFT theme, with strawberries growing from net pots embedded in a vertical PVC tower.  Notice the irrigation tube at the top which directs nutrient solution to cascade down over the roots.

Several different categories of crops don’t do very well in conventional nutrient film technique systems, for a variety of reasons:

As we have already discussed on a previous page, NFT is still an evolving approach, with a lot of potential yet for new crops.  If any of the crops above are on your personal "want to grow using NFT" list, then by all means look at ways to accomplish that goal.  For large plants and/or perennial crops, perhaps use a deeper and/or wider channel.  For cascading plants, try using channels which have more space between them and/or mount them higher off the ground.

Plant with taproots would be a challenge.  A very deep channel would allow sufficient room for taproot development, but a way would have to be found to suspend the plant within the channel.  One possibility would be some kind of elastic pocket which would expand as the taproot grew.  Imagination knows no bounds, and necessity has been (and remains) the mother of invention.  So, if taproot plants are on your to-do list, by all means get creative.

Plants which have a matting or clumping habit would also pose a challenge.  One way to overcome this challenge would be to use wider, yet still shallow channels, combined with some kind of net pot that could hold a clump or mat of plants.  While I personally have not seen NFT-specific net pots which might work, the standard plastic baskets used to sell berries would be a fairly close approximation.  Those plastic baskets would be large enough for small clumps, shallow enough for each plant's roots to reach the channel floor, and the plastic would last for at least a few seasons' worth of growth.

If you do come up with a novel way to grow any of these challenging crops in NFT, by all means share!  If you like, Contact Us and we'll not only share your development, but also give you credit for your innovation.