You are on page 10 of our twelve-page series on nutrient film technique.  Click any of the below pages to jump to that page. 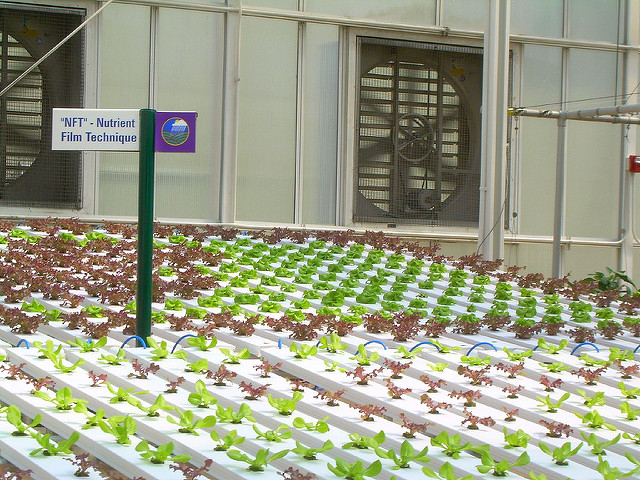 Nutrient film technique systems can be scaled larger or smaller relatively easily, with just a few well-considered design components.  Those components are best included in the initial system design, but they can be added later if needed.  As usual, some careful considerations in advance can save considerable effort later.

Nutrient film technique systems are relatively scalable, with a few caveats.  Let’s take a hypothetical NFT setup growing 20 channels of lettuce.  If the grower wanted to add 10 more channels, most of the work has already been done in terms of figuring out channel length, spacing, irrigation schedule, nutrient solution consumption, etc.  At that point the biggest variable would be whether the reservoir can accommodate the additional nutrient solution needed to supply the additional channels.  If the reservoir is big enough, then that expansion can just tap into the existing system.  If not, then any expansion plans will need to include a new reservoir.

Now let’s talk about reducing the size.  If that hypothetical grower wants to cut back from 20 channels to 10, then those 10 channels can simply be isolated from the reservoir such that nutrient solution no longer flows to them.  That can be accomplished very easily if the plumbing was designed with valves at the head of each channel, to control the nutrient solution flow into the channel.  This is a good example of how careful design in advance can make future maintenance, and expansion/reduction a lot easier.

All that being said, there is a point at which expanding or contracting any given NFT system needs to be carefully evaluated in terms of cost effectiveness.   For instance, let’s suppose that our hypothetical grower with 20 channels of lettuce wants to expand to 200 channels of lettuce.  One approach would be to simply buy or build 9 more systems just like the grower already runs.   That would simplify the planning since the existing system variables (channel length, slope, reservoir size, irrigation schedule, etc) have already been worked out.  On the other hand, any such large-scale expansion would be a prime time to take a step back and see if there are more efficient ways to accomplish that expansion.  For instance, instead of just getting 9 more reservoirs for that expansion, it might make more sense to get a single large reservoir to service all the channels simultaneously.  Similarly, it might be more cost effective to get fewer, bigger pumps rather than 9 more small ones.  Even the electrical service should be reviewed to see if the electrical infrastructure can handle that expansion.

If the expanded production is going to include new crops, that changes the math a lot.  Ideally, details such as channel slope, plant separation, irrigation cycle, etc should all have been worked out in advance, AND used in production within that particular operation and found to be not only effective but also practical.  A second option would be to carefully study a nearby operation, with variables as similar as possible to the intended operation, and then recreate their details.  Then a system can be designed which should give both practical and profitable production.

Scaling down a nutrient film technique system is easier.  If a grower has 10 channels of lettuce and wants to cut production, he or she can simply shut off as many channels as needed to reduce the overall growing area, then continue planting and maintaining the rest.  This is a good example of designing a system up front to be flexible.  When each channel, plumbing line, and/or reservoir can be isolated from the rest, they can either be isolated temporarily to make repairs, or isolated long-term to scale back on production.  This shutoff can be accomplished very quickly if valves are placed in both the input and output lines running from the nutrient solution reservoir to the channels and back again.  Each channel should have its own shutoff valves on either side of that irrigation cycle so that when closed, the nutrient solution won’t enter the channel from the reservoir when other channels are receiving nutrient, and nutrient solution won’t backflow into the channel when other channels are discharging their used nutrient.

If channels were built which did not include such valves, some careful timing and quick work can fix that situation.  If the irrigation circulation cycle has a decent gap between cycles, a grower can use that time to cut an opening in the line which delivers nutrient solution to the channel.  Then, the grower can quickly insert a valve into the line and reassemble the line before the next nutrient cycle begins.  If the nutrient solution is continuously cycled, or there is an insufficient gap, then the pump which cycles the nutrient solution will have to be shut down, and a new valve inserted as quickly as possible.  If a grower doesn’t have much experience with such things, then a few practice sessions on some scrap plumbing can dramatically speed up the installation process.  That can help ensure that the irrigation cycle is disrupted as little as possible.