This is page 2 of our eight page series on flood and drain hydroponic systems.  Click any of these links to jump to that page: 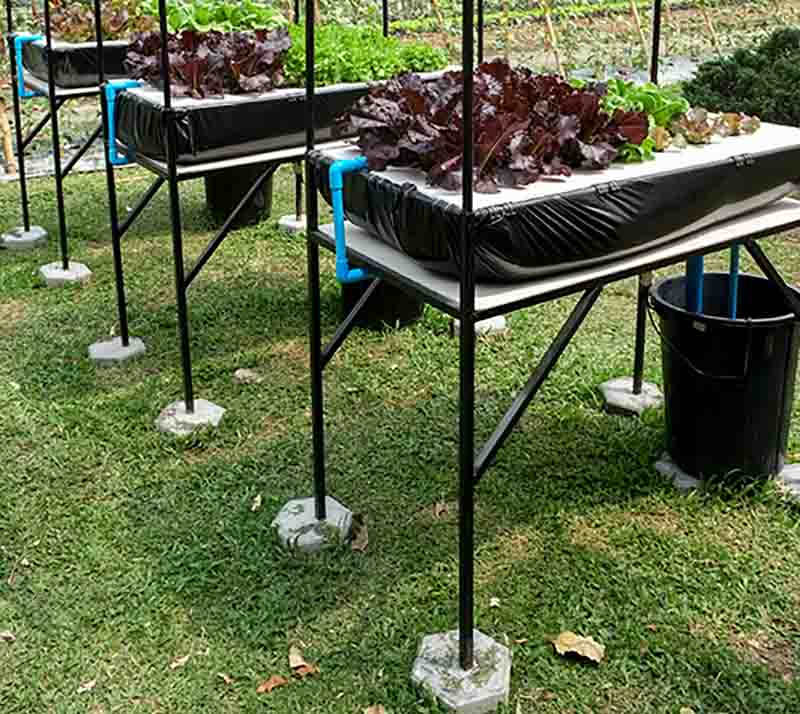 A homemade flood and drain system, growing various types of lettuce.  Notice that the flood and drain trays are lined with plastic, possibly to prevent and/or catch leaks.  Also notice that each flood and drain tray has a dedicated reservoir, consisting of an upright thick plastic trash can.  Additionally, the growing trays appear to be completely covered with a white lid, with cutouts for the individual plants.  That lid prevents insects and birds from getting into the growing media.  While not visible in the picture, these flood and drain containers appear to be under an awning or canopy of some kind to prevent rainwater from hitting the containers.  A tidy, practical DIY approach to home grown salads.

Disadvantages of a Flood and Drain System

On the previous page of our series on flood and drain systems, we looked at an overview of the system, along with a number of advantages.  In the spirit of giving a balanced view of various hydroponic approaches, we felt the need to list disadvantages as well.

The first disadvantage is that the irrigation cycle must be very carefully timed such that the amount of nutrient solution going into the container doesn't accidentally overflow the container.  That can be accomplished a few different ways, and once dialed in it doesn't need to be adjusted very often.  But getting it dialed in can be a hassle.  It depends upon what kind of growing media is used, the maturity of the plants, the method of irrigation (pump versus manually lifting the bucket), and even local humidity.  Most growers will give themselves a bit of a safety margin by filling the container only 3/4 full of growing media, then setting up the irrigation cycle such that it doesn't even quite reach the top of the growing media. The roots are all still perfectly irrigated in that arrangement, and there is a bit of a margin just in case the irrigation cycle puts a little too much nutrient solution into the container.  However, the single biggest reason that the container would overflow is that the drain line becomes partially or completely blocked.  When that happens (notice I said 'when', not 'if'), then a small margin would quickly be overcome and the container would truly flood.  One way to guard against this is to have a main drain and then a backup drain which is located higher on the container.  The main drain would be used during each irrigation cycle, while the backup drain would only be used if the main drain became blocked.  Moral of the story, check the drain(s) on a regular basis.  Once a week is not too often, particularly considering that a five minute task can prevent a lot of anguish later.

Another disadvantage of flood and drain, which is present for other hydroponic systems but not quite as severe, is the risk of an irrigation cycle or pump failure.  This can ocur for a variety of reasons.  One of the simplest is that the power goes out and the pump doesn't send nutrient solution to the container.  Another simple reason is that the pump simply wears out and seizes.  A third is that water splashed onto the outlet and tripped a breaker.  A fourth reason is that the irrigation line itself became clogged.  Whatever the reason, when (not if) the irrigation cycle stops then the plants start to dry out.  That's why having a reservoir at the bottom of the container is a good idea.  It can buy at least a few hours' of time between the start of a problem and the moment a human attendant can fix things.  Another way to guard against this issue is to have a sensor or alarm to warn you that the irrigation cycle has failed.  That sensor can take a variety of forms: a water level sensor which indicates that the container filled correctly, or a moisture sensor to indicate that the growing media is drying out, or a power outtage signal which indicates a loss of power, etc.  Frequent human monitoring is a really good check too.  The best way to deal with this risk is to anticipate the types of things which can go wrong, determine how likely they are to occur, and then prepare redundancies or alarms or checks of some kind against the most likely problems.

A third disadvantage of ebb and flow systems is that they are not particularly suited for germinating plants.  The constant rise and fall of the water level can float seeds too high or pull them too deeply into the growing media.  Lightweight seeds can even be carried down the drain, never to be seen again.  Or they can block the drain and result in a container flood.  In most instances, plants should be germinated elsewhere, and then transplanted into the container after they've got enough of a root system to guard against being moved by the flood and drain cycle.  An alternative is to use growing media which will minimize the risk of the seeds being dislodged, and/or carefully control the irrigation levels such that nutrient solution reaches almost, but not quite to the level of the seeds.  That latter method is extremely difficult to pull off consistently, and is most successful with really large seeds like squash.  For small seeds like lettuce, spare yourself the headache and sprout them elsewhere.  Then transplant when they have something of a root system to hold them in place.

Click any of the following links to jump to that page: