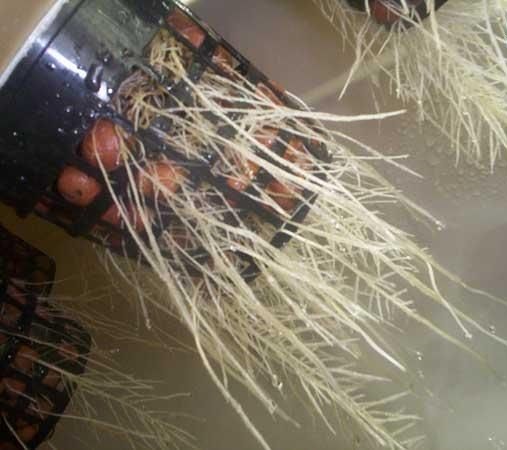 A close-up of a DWC netted pot, with hydroton being used within as growing media.  If using hydroton, the netted pot openings must be small enough to prevent the hydroton pellets from falling out.  Other forms of growing media, such as rockwool cubes, can use netted pots with larger openings.  Some growers dispense with the netted pots entirely when using the cubes.  Other growing media such as rockwool croutons or coir need netted pots with much smaller openings, since they are looser, finer materials.  Note the almost translucent color of the roots; this is what healthy root growth looks like.  If roots turn yellow, brown or black, they are diseased or dead.  If they are tinged green and/or covered with algae, too much light is getting into the reservoir.   If they are covered with slime or mucus, both the plants and the reservoir are infected.  The plants may or may not be salvageable.  The reservoir should be dumped and cleaned prior to its next use.  Image courtesy of www.instructables.com.

You are on Page 3 of our six page series on deep water cultivation systems.  Click on any of the below pages to jump to that page.

What Growing Media Is Used in Deep Water Cultivation?

Deep water culture, like several other hydroponic techniques, relies on seeds being sprouted elsewhere and then transplanted into the system after initial root growth has reached sufficient length.  How those plants are sprouted will depend in part on the particular crop(s), and in part on the grower’s preferences and equipment.

One very common option is to use net pots, which are specifically designed to hold not only the plant and growing media, but also to allow root growth to pass through the sides of the pot.  Net pots are a common approach in hydroponics for not only DWC but also Nutrient Film Technique (NFT).  As such they are widely available in a variety of sizes.  Net pots allow growers to use a variety of growing media, such as hydroton, rockwool cubes, coir or gravel.  Some net pots have small enough openings that growers can choose growing media with smaller size, such as perlite/vermiculite or sand.  Many commonly available raft designs assume the use of netpots and will have pre-cut openings which match net pot diameters.  For DIYers who make their own rafts out of Styrofoam, a hole saw can very nicely cut holes in the Styrofoam of the correct diameter.

If growers would prefer, they have a few other options besides net cups.  Some growers opt to use a variety of seedling options borrowed from conventional agriculture and gardening, such as fiber pots and even plugs of soil or coir.  These options are a little tricky to use, because they disintegrate over time particularly with constant exposure to moisture.  However, some crops put out so many fine roots that they’ll hold shape even after the initial pot or plug has disintegrated.   This may seem wasteful, but it does save growers the hassle of collecting those net pots at the end of each growing cycle, then cleaning and storing them.  I do need to add a note here that if using these latter options, the nutrient solution would eventually need to be filtered or cleaned of the residue.

As we already briefly discussed, moisture loving crops love deep water culture.  Lettuce, salad greens, cress, and cool-season herbs do very well with DWC.  Crops which prefer moderate conditions can also do well in DWC as long as the nutrient solution is well oxygenated with air stones.  Keep in mind that crops which hate wet feet actually hate low oxygen conditions.  If the grower supplies plenty of oxygen in the nutrient solution, then many plants will do well in DWC.   Just keep in mind that those crops which prefer dry conditions, or strong wet/dry cycles, may not do as well in DWC even with supplemental root zone oxygen.

Another factor to consider is the crop’s mature size, weight and shape.  Plants which have a vine or bush habit, such as tomatoes, melons, squash, peppers and corn will be difficult to grow in DWC.  While their roots would do well in the nutrient solution, their size, weight and shape would put a lot of stresses on the rafts which support them.  If growers were determined to raise these plants in a deep water culture system, they could use a trellis system to help carry that weight.  The trellis system would have to be self-supporting, rather than resting on the rafts themselves.  It would be clunky but it could be made to work.

As with other hydroponic techniques, many of these so-called obstacles could conceivably be overcome with some creativity and dedication.  So the bottom line is that deep water culture is very well suited to moisture-loving plants, and could also be used with other crops as long as certain caveats were met.

To start with, many root crops don’t do well in DFC.  While they may very well appreciate the constant moisture, particularly shallow-rooted plants such as onions and garlic, the raft which holds them can’t very easily accommodate their drastic change in diameter over the growing season.  To be more specific, homemade Styrofoam rafts could conceivably be used once for root crops, if the crops were started in plugs or fiber pots then transplanted into Styrofoam rafts.  As the plants grew, the fiber pots or plugs would gradually give way to the expanding root diameter, as would the Styrofoam.  However, the holes in the Styrofoam raft would be permanently deformed after the crops reached maturity, such that they could only be used once.  That would get very expensive if the rafts had to be replaced after each crop.

Another group of crops which don’t do well are those which need actual dry soil conditions, such as crops which grow in arid conditions.  These crops might limp along in deep water culture, but their strong tastes often develop in drought conditions.  As such, their taste would be bland if raised in DWC.  Rosemary, tomatoes and peppers are three crops which benefit from dry conditions.

You are on Page 3 of our six page series on deep water cultivation systems.  Click on any of the below pages to jump to that page.